The program will be divided into three levels: 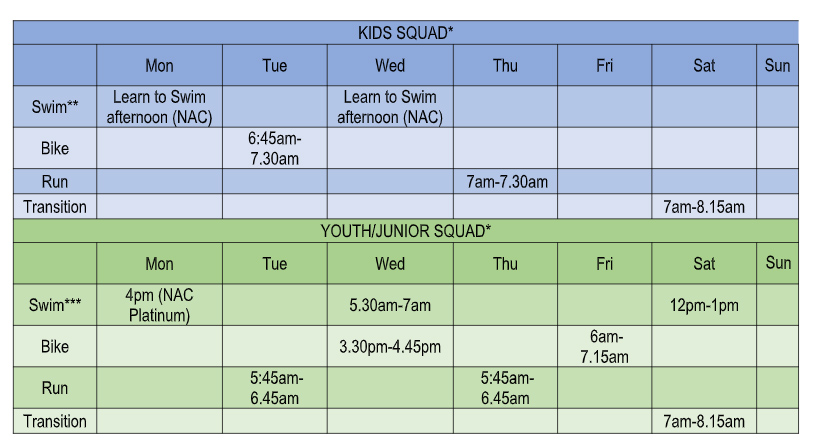 1-DAY FREE TRIAL EVERY SATURDAY 7AM AT THE GIRAWEEN SPORTS COMPLEX.

*Schedule subject to change overtime to adapt to each level`s needs and progression.
*Although there is an age range defined to each level, the participants’ will be allocated according to
their abilities.
**The swimming is done via Learn to Swim at the NAC. The days are a suggestion and it depends on
their availability.
*** Monday afternoon swim is done via NAC at the Platinum Squad. It is a suggestion and it depends
on their availability.
Cost: Kids Squad – $130/month
Youth/Junior – $200/month
Private Lessons: $60
Before joining the weekly program, athletes must have a Triathlon Australia membership. We
recommend the Standard membership through the link below if you wish to train and race consistently.
Do not forget to link the membership to the Noosa Tri Club.

https://www.triathlon.org.au/Membership/Annual_Membership/Standard.htm
Not sure about if triathlon suits your children?
TA offers a ‘Try Before you Buy’ option. We recommend the 8-week TBYB option ($20) through the link
below:
https://www.triathlon.org.au/Membership/Tri_Before_You_Buy.htm
The TBYB package does NOT cover you for insurance costs when racing – you will still need a One
Day Membership to race.
If you would like to know more about the Holiday Training Camp, get in touch with Joe by clicking here.

About the Coach
Joe Fernandes has been involved in triathlon for the past 14 years. He joined his first triathlon squad in
2008, in his hometown Brasília (capital of Brazil). Since then, he hasn’t stopped being involved with the
sport.
Joe is a former ITU 30-34 Age Group Sprint World Champion (Chicago, 2015), and has several
podiums in Sprint, Olympic and 70.3 distances.
In 2010, during his academic studies of Physical Education, he started working as a triathlon assistant
coach and swim instructor, working with athletes from sprint to ironman distance. Later that year, he
had his first international experience at the ITU World Championships in Budapest.
Joe moved to Australia in 2016 to study a master’s degree in Sports Management and Project
Management on the Gold Coast. Since his first days in Australia, he has been working as a learn to
swim instructor and coach.
Now settled in Noosa, he has been working at the Noosa Aquatic Centre for about a year. In
partnership with the Noosa Tri Club, Joe has been working on a project to foment triathlon and increase
participation at kids, youth and junior levels through a development program.